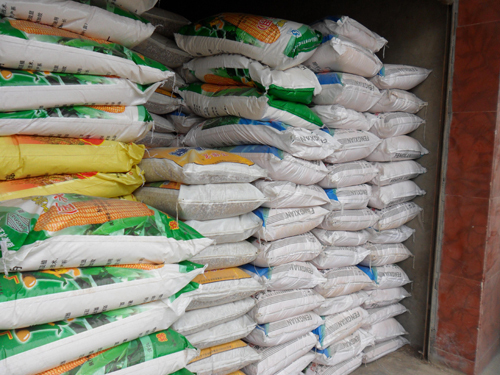 Overcapacity, corporate losses, sluggish market conditions, industry reshuffling, and the country's cancellation of fertilizer subsidies... 2014 is destined to be the â€œeventful eventâ€ for the entire fertilizer industry. The major changes in the Chinese fertilizer industry have become inevitable and irreversible. In this context, a group of integrated companies that are accelerating innovation, upgrading, transformation and development, represented by China's Xinlianxin Fertilizer (Hong Kong stock code: 01866. HK, hereinafter referred to as Xinlianxin), have taken steps in the industrial restructuring. The forefront of the industry has completely opened the prelude to the era of innovation and transformation.

This year, Xinlianxin adhered to the strategy of â€œleading total cost leadership and market differentiationâ€. Through the joint efforts of all employees to achieve the expected business objectives, the company has maintained a steady development and won the industry leader in energy efficiency for the first time in three consecutive years and won â€œChina. The â€œPrivate Chemical Transformation and Upgrading Demonstration Enterpriseâ€ honorary title was reported twice by CCTVâ€™s second â€œEconomy of Half an Hourâ€ column. An exclusive interview with Xinlian Xin, Chairman of the China Nitrogen Fertilizer Industry Association and Liu Xingxu, Vice Chairman of the China Nitrogen Fertilizer Industry Association.

Drive innovation to lead the industry

At the just-concluded Central Economic Work Conference, "innovation" appeared in the meeting communique up to 16 times. Some media have pointed out that after China's economy has entered a stage of overrunning and climbing, innovation can ultimately drive China's economy to climb again. For the fertilizer industry facing unprecedented difficulties, innovation is the main theme of future industrial development. Only by actively exploring and developing new fertilizers suitable for China's agricultural development can we be invincible in the fierce market competition.

The keen domestic companies have already captured this point. Since 2006, Xinlianxin has cooperated with Chinese Academy of Sciences, Chinese Academy of Agricultural Sciences, Henan Agricultural University and other research institutes. It has devoted great efforts to research and development of long-term, energy-saving, and environmental-friendly fertilizers, granules, and blacks. Force humic acid and other series of high-efficiency fertilizer. Up to now, a total of more than 1 million tons of high-efficiency fertilizer has been promoted, and an area of â€‹â€‹over 2500 acres has been promoted. Through a large number of demonstrations, the yield per hectare is nearly 100 pounds more than that of conventional fertilizers, with an increase in production rate of about 10%. The cumulative increase in grain output is more than 2 billion kilograms and the increase in income is more than 2 billion yuan.

In 2012, the company invested heavily in cooperation with the Chinese Academy of Sciences, and successfully developed a new generation of lost urea and loss-control compound fertilizers with green environmental protection, increased production and income, and control of nutrient loss. This technology is the first in China and has two national patents. China's built-in loss-control urea was the first in the industry, and it was at the forefront of the development of traditional urea products. Since the loss of control compound fertilizer and loss of control urea entered the market, the company has conducted demonstration experiments on various crops such as corn and wheat in various regions across the country. Farmers do not add fertilizer or pollute the environment, but they average more than ordinary fertilizers per acre. The production increase is about 10%. At present, the cumulative promotion is 425 million mu and the social benefit is more than 600 million yuan.

Chairman of Xinlianxin Liu Xingxu said: â€œAt present, the utilization rate of chemical fertilizers in China is only 1/3. How to increase the utilization rate of chemical fertilizers, reduce investment, increase production, and protect the environment are the development directions of the entire industry. Controlling lost urea and controlling lost compound fertilizers are In line with the development trend of modern agricultural health, its success has further strengthened our confidence and determination to increase and strengthen new-type high-efficiency fertilizers represented by loss of urea and loss-control compound fertilizers.We have also established cooperation with the China Nitrogen Fertilizer Industry Association this year. The China Nitrogen Fertilizer Industry Technology Research Center must further accelerate product innovation and promote industrial technological progress."

Li Shousheng, chairman of the China Nitrogen Fertilizer Industry Association, told reporters in an interview that overcapacity has been one of the main reasons for the continued sluggish fertilizer market since last year, and the elimination of excess backward production capacity has become a top priority for the fertilizer industry.

It is understood that the relevant government agencies are already in the process of adjusting fertilizer subsidy policies, and it is very likely that some subsidy policies will be cancelled to speed up the structural adjustment of the chemical fertilizer industry and promote the marketization process. In the next few years, the chemical fertilizer industry shuffles and the market competition becomes increasingly fierce.

Then, how to find a way out in a dilemma and seek development in a crisis will benefit from our strategic vision to examine the development of the company. As early as 2012, Xin Lianxin clearly proposed to stick to the strategy of "leadership and differentiation of total cost" and fully realize the four transitions of "technology, scale, management, and marketing", focusing their efforts on adjusting the structure of raw materials, Technology and product upgrading, base development layout in three areas. Taking full advantage of the resources and market advantages of both Xinxiang and Xinjiang, and on the basis of persisting in making the main business stronger, the coal chemical industry chain will be extended to achieve leap-forward development.

Chairman of Xinlianxin Liu Xingxu told reporters with gratification: Our goal is: By the end of 2015, the companyâ€™s urea and compound fertilizers will have a production scale of 4.5 million tons, and all of them will be dominated by high-efficiency fertilizers; within two years, the two cities will basically complete Xinxiang and Xinjiang. A fertilizer production base construction, and strive to become "China's most respected fertilizer business group."

The Xinxiang base project using modern coal gasification technology was put into operation in November last year, and the advantages of new technologies are now fully realized. The company's coal chemical industry base in Xinjiang is expected to be put into operation in August 2015. At that time, not only will the scale be upgraded, but also the heart and the chemical fertilizer from the â€œsmall nitrogen fertilizerâ€ will truly enter the â€œbig nitrogen fertilizerâ€ ranks.

In 2014, Xinlianxin also clearly stated that it must fully implement the â€œten upgradesâ€ of the companyâ€™s marketing upgrades, technology upgrades, production upgrades, information upgrades, and logistics upgrades, accelerate the transformation and upgrading of enterprises, and activate new vigor for corporate development.

Li Shousheng, chairman of the China Nitrogen Fertilizer Industry Association, once said: Soil testing and fertilization is a policy that our country strongly advocates and is the best method for rational fertilization. According to different soil conditions, what is lacking in supplements can greatly increase the utilization level of fertilizer efficiency, reduce the pollution of residual fertilizer on land, and reduce the cost of farmers' fertilizer.

Xinlianxin Company is the earliest designated manufacturer of soil testing and formula fertilization established by the Ministry of Agriculture. Xinlianxin Corporation cooperates with 48 local soil fertilization departments including Xinxiang County, Huixian County, and Xiping County of Henan Province, and accumulates them according to the specific needs of the market. More than 200 formula fertilizers such as wheat, corn, peanuts, vegetables, and fruit trees have been introduced, totaling 1 million tons, and the total area has been expanded to more than 24 million mu, which has effectively promoted the increase in production and efficiency of local crops and scientific fertilization.

After comparing the data measured by the agricultural sector, the average fertilization field per acre of soil testing for farmer friends saves fertilizer costs by 20 yuan, an average increase of 56 yuan per mu, and a total of 76 yuan per mu. This reduces the input of farmers by 7 years. Billion yuan, increased income by 1.344 billion yuan, cost-effectiveness 1.824 billion yuan, and created more significant social and economic benefits.

Xinlianxin has actively explored new modes of cooperation between farmers and enterprises over the years to promote the development of soil testing and formula fertilizer. Not only vigorously promote the mode of seed fertilizer simulcasting, but also actively explore the promotion of new models of intelligent terminal fertilizer. Intelligent terminal fertilizer technology combines organic soil testing, fertilizer application, production, management, and service to fundamentally change the fertilization habits of farmers. It is due to soil types, crop demand, and the need for precise fertilizer application by farmers. Formula, a bag of fertilizer processing. In 2014, Xinlianxin established an intelligent terminal fertilizer distribution station in three markets: Xinxiang County, Huaiyang City, and Jixian County, carrying out on-site soil testing and fertilizer distribution, directly applying fertilizers, and sending fertilizers to the home; at the same time, they communicated with the local Bureau of Agriculture and Soil and Fertilizer Stations. Cooperate to achieve resource and data sharing, establish a cooperative service platform for farmers and enterprises, and jointly provide full-service for large farmers and land transfer.

In 2015, Xinlianxin will set up about 30 smart terminal fertilizers franchise stores on the basis of the internal and external networks of the province. According to the different nature of the soil, it will study the raw materials with functional high value-added fertilizers, so that each formula fertilizer bag The science and adaptability are stronger.

"Intensifying the joint efforts of agricultural enterprises, deepening the formulation and fertilizer services, and promoting the development of scientific fertilization" is not only the direction of the development of enterprises, but also the necessary conditions for the transformation of the company's marketing. However, if the enterprise wants to do a good job in the docking of agricultural enterprises and formulating fertilizers, it must Focusing on the needs of farmers, we must effectively solve the farmers' production problems and ultimately help farmers increase their production and income. The promotion of new technologies, new products, and new models has always required the process, but it must be the direction of the industry's development.

The Zirconium  bar processing service: cutting, bending, surface treatment, embossing, and so on.

They are available in varying size and can be ordered to different sizes and specifications.