January 25, 2020
[ Huaqiang Security Network News ]
New concept of community perimeter alarm system
The purpose of the â€œSafe City Systemâ€ is to help the public security system collect, identify and process video image information of various urban targets, and realize the flow and sharing of information between the various police business entities, and ultimately the detection of various cases. And the prevention, control, etc. of the ** pieces play a very good role in assisting. Today, a variety of technical prevention systems can build a safe city system and become one of the most important measures to ensure the smooth development of the social economy.
As we all know, technical prevention, as a means of security, has become an important part of modern security management and an important part of the advanced nature of security and security functions. The modernization of security technology at home and abroad is to integrate video surveillance, perimeter alarm, access control system, intrusion detection, access control, patrol and other systems with computer digital control systems to form a modern, multi-functional, all-weather Dynamic integrated security management system.
This is only a case of intelligent perimeter defense alarm system, electronic fence system and leaky cable. It focuses on the analysis of its basic structural features and its application in deepening the construction of Ping An.
To this end, in line with the functions of complete functions, innovative applications and reasonable investment, we provide intelligent perimeter comprehensive solutions. The program fully reflects the concept of sustainable development, using management platform software (such as SAMl00 type), NVR, electronic fence perimeter alarm system, alarm linkage and network technology and other products and means to achieve multi-system, centralized real-time on the unified platform Control and comprehensive functional services to achieve a new benchmark for safety and security work.
Since the intelligent perimeter comprehensive solution fully exerts the positive role of modern scientific and technological precautions, it greatly improves the safety factor. Existing perimeter warning alarms and similar products include electronic fences, infrared radiation, vibration cables, electrostatic induction cables, traditional power grids and leaky cables. With advanced products and security services provided by the power industry, railways, military, education, airports, factories, communities and so on.
Community perimeter alarm system solution
Intelligent perimeter defense alarm system architecture
The intelligent perimeter defense alarm system architecture integrates the intelligent electronic fence perimeter alarm system, video surveillance system, voice intercom system and lighting control system. When someone illegally climbs over the wall or destroys the fence, the electronic fence host is in addition to the high-voltage deterrent. The alarm will be immediately transmitted to the management center. The management center will receive and process the alarm signal, and the monitoring screen of the intrusion area will pop up on the computer. At the same time, it can be linked with other systems by adjusting the camera to the preset position, opening the searchlight, and audio drive away. . After the central security personnel finished the process, the alarm status of the alarm host and the electronic fence was restored. The intelligent perimeter protection alarm system is fast, practical and convenient. Figure 1 is a schematic diagram of the architecture of the intelligent perimeter defense alarm system. 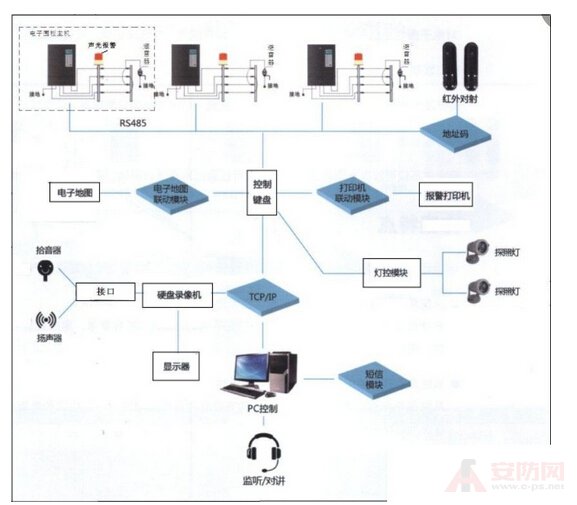 The characteristics of the program and the core technology: the design conforms to the industry standards and norms, and the system equipment is selected from the products with the inspection report of the Ministry of Public Security or the registration and registration certificate; the system is open, expandable, compatible and flexible, and the system can adapt to various scales. It has strong scalability and can adapt to the expansion requirements of the system at any time. At the same time, it has high compatibility and spirituality, adapts to product upgrade and replacement, and maintains strong vitality. The system has high security and reliability. Fault tolerance. The system itself has high security, strong fault tolerance and self-test function for users of different levels and qualities, to avoid the instability caused by the system during use. The core technology is: one is unified management, the security management platform integrates various security subsystems, forms a unified management platform, realizes centralized control and hierarchical management, and makes the security defense system play the highest utility; the second is intelligent control. The electronic fence mainframe can realize local and remote control, such as disarming, high and low voltage switching, control switch, etc. The third is dynamic linkage. After the alarm occurs on the perimeter, the alarm device such as video monitoring, audio and lighting control can be linked in real time; Fourth, cross-regional management, managers can not only view and supervise locally, but also manage and control off-site and cross-industry through the network.
Subsystem I, perimeter alarm system
The perimeter defense alarm system generally consists of four parts: the detection part, the signal transmission part, the alarm linkage part and the control part. After installing the perimeter protection alarm system in a specific area to be protected, when an attempt is made to traverse or climb the boundary around the protected area, the detecting device on the boundary detects the intrusion and sends an intrusion alarm signal, and at the same time, the intrusion alarm signal is transmitted through the transmission portion. Send to the alarm linkage part (such as: sound and light alarm, video surveillance, access control system, etc.), prompt the relevant personnel. In addition, the relevant personnel can control the entire system through the control part. The perimeter alarm system is the first line of defense and the most important line of defense. It is responsible for the safety and security of the base. The remote control function of the electronic fence detector can be realized by a hard disk recorder with electronic fence control function, such as remote cloth/disarming, high and low voltage switching, and alarm information inquiry. Therefore, the DVR can be used as the control center of the perimeter alarm system.
Subsystem 2, video surveillance system
The video surveillance system can create a highly supervised and full real-time recording environment for perimeter prevention, which can greatly reduce the number and labor intensity of the upper supervisors, while reducing the cost of prevention. Since the video surveillance system records the whole process of each monitoring point in real time, when the intruder illegally crosses the fence or destroys the fence, the camera can automatically go to the preset shooting angle to record the intrusion screen in real time. The video surveillance system can also call previous work recording records to provide evidence to the staff.
Subsystem three, two-way voice intercom system
The two-way voice intercom system transmits the audio stream through the local area network or the wide area network, and is centrally managed by the monitoring center platform to quickly establish an audio dialogue mechanism between the alarm scene and the event handler for the financial industry, the judicial industry, the safe city or Establish a simple and effective timely communication plan for emergency situations such as the Safe Campus, and respond to various emergencies.
Subsystem four, lighting control system
The lighting control system is mainly composed of a software platform, a relay control module (light control module), a driving power supply and a spotlight. The remote control of the lighting linkage system can be realized through a software platform, such as the opening and closing of the lighting linkage. The intelligent perimeter defense alarm system integrates the light control into one, and can set the perimeter boundary to correspond to the physical address of the corresponding light control module. When the perimeter defense zone alarms, the corresponding light control module can be linked to achieve one-way or multi-channel lighting control. The lighting control can also open or close the searchlight remotely through the software platform to provide lighting compensation requirements for the site, which is convenient for the staff to perform night maintenance. Its main equipments include lamp control modules, spotlights, and drive power supplies.
Unique multi-system linkage
The perimeter alarm linkage integrated management platform is a set of â€œintegratedâ€, â€œdigitalâ€ and â€œintelligentâ€ security integrated management integration platform, integrating perimeter intrusion alarm, video surveillance, two-way voice intercom, lighting control and other systems. It can realize the unified management and linkage of multiple subsystems under one platform, so that the entire security system can truly realize the "integrated and intelligent" management and strengthen the management effect.
The specific scheme is: when the human intrusion triggers the alarm signal, the linkage recording speaker issues a warning, so that the corresponding zone alarm turns red, the video software pops up the animation surface, the system automatically leaves the alarm record, and the on-duty personnel record the processing situation into the computer, relevant Personnel are modified or deleted according to different limits. The signal will be transmitted to the dispatch center and then sent to the superior management department.
The speed alarm linkage responds to the "GB50198" 4 seconds alarm video response, "GB50394" 2 seconds alarm response, the industry's fastest 0.50 seconds. 4 seconds is enough for an adult to run 20 meters before the video linkage display after triggering the alarm.

The Barbecue Wire Mesh other name is BBQ Wire Mesh. Be made by Stainless Steel Wire and medium carbon Steel Wire welded or weave to done.

The advantages of Barbecue Wire Mesh : 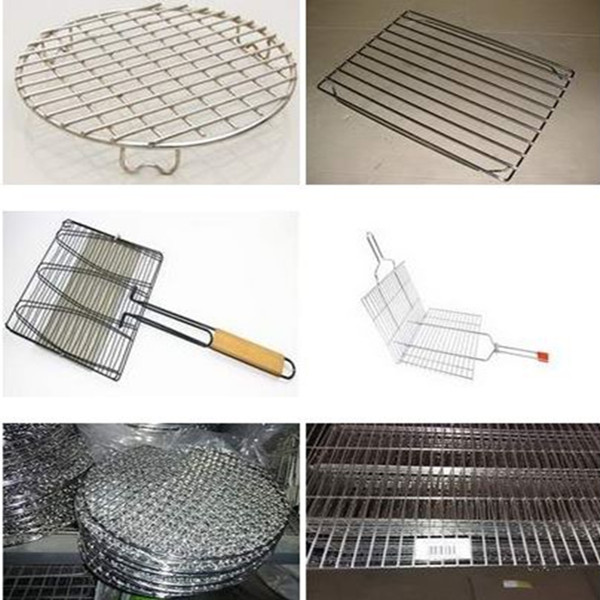